Journalism that changes the world 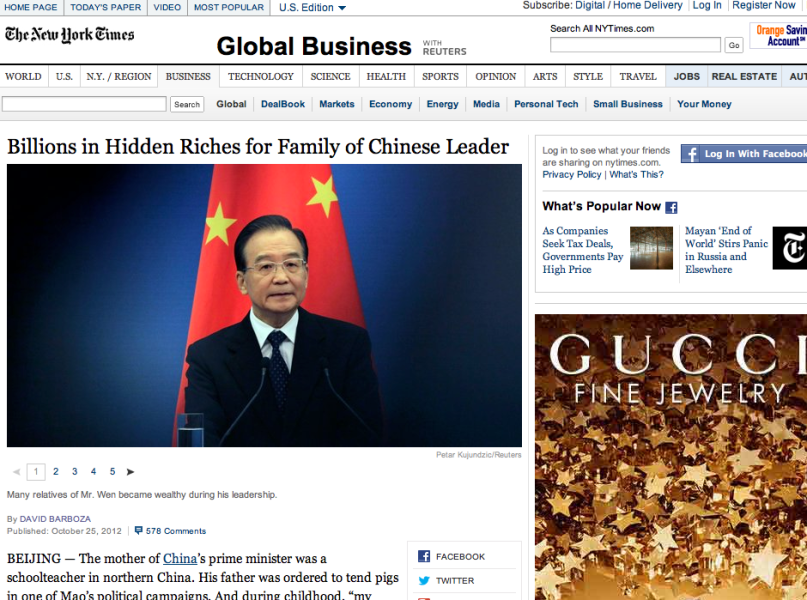 David Barboza is The New York Times bureau chief in Shanghai and the author of an article of immense importance recently published in that newspaper. Barboza’s article meticulously documents how family members of Wen Jiabao, China’s prime minister, have amassed an enormous fortune and how their economic success coincides with his ascent to power. In principle, this is nothing. Hardly a day goes by without a scandal breaking somewhere in the world involving the shady business deals of politicians, government officials and their accomplices in the private sector. And to say there is corruption in China is to state the obvious. But this article, and this scandal, are different.

How to deal with corruption? Media denunciations of the malfeasance of those in power are as frequent as they are inconsequential. Corruption scandals make a lot of noise, but too often are not well documented and inadequately reported and thus tend to come to nothing. The constant flood of exposés which have no consequences feed the public’s cynicism, undermine trust in government and end up corrupting the fight against corruption. This is not the case of Barboza’s article, which is based on the best, most rigorous investigative reporting effort I have seen. It is based on data confirmed by multiple sources; hard-to-refute documentary evidence; complex financial analyses audited by independent accountants hired to ensure the article’s precision; and on a long, dogged and surely very expensive labor of investigative journalism. This, of course, has not stopped lawyers representing Wen Jiabao and his family from publicly denying Barboza’s claims, while Foreign Ministry spokesman Hong Lei said, “Some reports smear China and have ulterior motives.”

It is obvious that the article, published outside the country, is not going to make any definitive dent in Chinese corruption. But it is equally obvious that government officials and their relatives involved in dishonest business deals now know that their impunity and the public invisibility of their business activities cannot be taken for granted. Some will simply hide their deals better but others may think twice before entering into a transaction that may destroy their career — or worse.

Good journalism is invaluable, and expensive. Barboza’s great article could not have been produced by a blogger, by social media activists or by a journalistic organization that merely “aggregates” – that is, reproduces on the web – the original contents of others. This article was possible thanks to the independence, organization, financial resources and the high professional standards of The New York Times. All this is expensive. But this is what produces journalism of great social value, on a global scale. Internet, and the trends that are now undermining the financial viability of the major news media, are in large measure unstoppable. But this NYT article reminds us how impoverished we will all be if organizations capable of producing objective, independent, high-quality contents become unviable. It also reminds us of the value of dogged reporters who chase a story until they unveil its most hidden details. Opining is easy and has become very common. Rigorous and objective reporting is much harder — and is becoming rarer.

The Great Wall of China no longer protects. In antiquity, the Great Wall did not always provide enough protection against Mongols marauding China. Its modern version is equally ambitious… and porous. The great cyber-wall that the Chinese government has built to censor the contents that circulate online cannot ensure that the Chinese will not learn about the revelations in The New York Times. The government has blocked that newspaper’s page in English and in Chinese, as well as access to it by means of search engines such as Google or social media like Weibo, the Chinese answer to Twitter. Thousands of censors are busy monitoring and blocking the spread of this story. But the story is already out in all of the world’s news media, on the internet, social networks, and eventually in the mouths of many in China. Medieval technologies such as censorship are at a great disadvantage when pitted against modern information technologies. Certainly, thanks to vast censorship, hundreds of millions of Chinese will never learn that their prime minister’s family has accumulated a fortune of $2.7 billion. But several million already know. And this didn’t happen before in China.

The consequences for you. China is going through difficult times. Economic growth is decelerating. Protests in the street over all sorts of grievances are proliferating. On November 8, the Chinese Communist Party Congress begins, led by its new chief, Xi Jinping, who in March will be named president. The transfer of power has been fraught with tensions and struggles between rival factions, including the defenestration of Bo Xilai, one of the party’s most influential leaders. It is hard to imagine that the NYT revelations will play no role in these struggles. Yet, for now, nothing indicates that the changeover in China’s leadership will be drastically altered or that political turmoil is probable. But if that should happen, the Chinese economy will obviously suffer, which in turn will aggravate the European crisis, and affect the many countries that depend on the good health of the world’s second-largest economy.