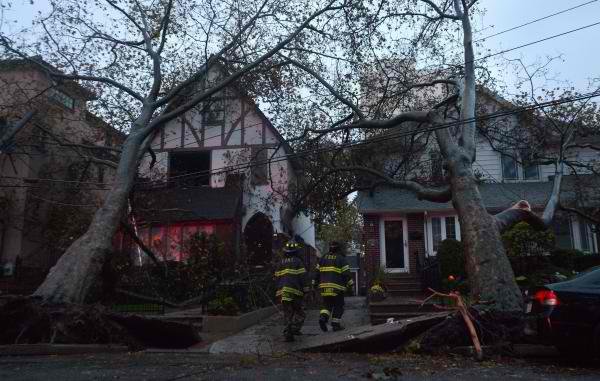 Hurricane Sandy reminded us of several lessons: 1) The fundamental protagonist when disasters strike is the government, not business. 2) Political conflict becomes uninteresting and counterproductive. People want rescue, immediate help and support to recover and rebuild, not ideologically infused speeches. 3) Governors and mayors of the places ravaged by the disaster are the main players – at times even more than the president. Barack Obama played an effective and much applauded role, but the mayor of New York, Michael Bloomberg, and New Jersey’s governor, Chris Christie, were the leaders who responded most directly to the needs and demands of Sandy’s victims.

This last lesson is just one more manifestation of a global trend that transcends catastrophes. There is a flight of power from the national government toward state and local authorities. Presidentialism is giving way to local leadership. The decentralization of authority, and of budgets and decisions that most directly affect people, is a trend that can be seen from China to Colombia, India to Italy, and Indonesia to Spain. Everywhere, the heads of regions and provinces, governors and mayors, are enjoying growing autonomy, which allows them to be the leading voices in ever more diverse matters.

Luis Alberto Moreno, the president of the Inter-American Development Bank (IDB), gave me an illustrative example of this trend. In June, Moreno, representing his institution, participated in the third international summit on the environment. This meeting, attended by representatives from 192 countries, including 88 heads of state, was called Rio+20 in reference to the fact that it is 20 years since the first world conference, held in Rio, took place, to address the urgent need to deal with the effects of environmental damage. As is common in these multilateral meetings, the agreements reached at Rio+20 reflected some progress, but were also the source of great frustration.

Nobody was happy because, to reach consensus between so many countries, it is necessary to water down the agreements in order to make them acceptable to all: rich countries, those of middle income and the poorest; exporters of hydrocarbons, and importers; the industrialized and the agricultural; those with stagnant economies and those with booming ones; those whose centuries of industrialization have already polluted the planet, and those who are just beginning to industrialize and pollute. To approve agreements built around the lowest common denominator is, then, the norm at these international summits. And these agreements are woefully insufficient, given the need for intervention in what is already a global emergency.

But what do decentralization and the flight of power have to do with all this? The answer is C40. Some days before the great summit of heads of state in Rio de Janeiro, a group called C40 met in São Paulo. It was made up of the mayors of 40 big cities who have decided to act effectively, immediately and together to reduce carbon dioxide emissions. The steering committee of C40, is now presided by the mayor of New York, and made up of his colleagues the mayors of Berlin, Hong Kong, Jakarta, Johannesburg, Los Angeles, London, São Paulo, Seoul and Tokyo.

Cities have a determining weight in the pollution that causes climate change, and thus, a crucial role in mitigating its consequences. For the first time in history, more than half the planet’s population lives in cities, which consume 75 percent of the energy and produce 80 percent of the greenhouse-effect gases that contribute to global warming.

“I was impressed by the contrast between the action of the C40 mayors, based on practical initiatives, concrete and ambitious goals, and the vague intentions which are typically agreed upon in large gatherings of heads of state,” Moreno, the IDB president, told me.

This ascent of regional and local leaders can be seen not only in their environmental initiatives, but in many other fields. And while there is much to celebrate in this trend, there is also much to fear. In Europe for example the newfound power of local and regional leaders can easily nurture separatist ambitions driven more by political opportunism than by efforts to find solutions to people’s concrete problems.